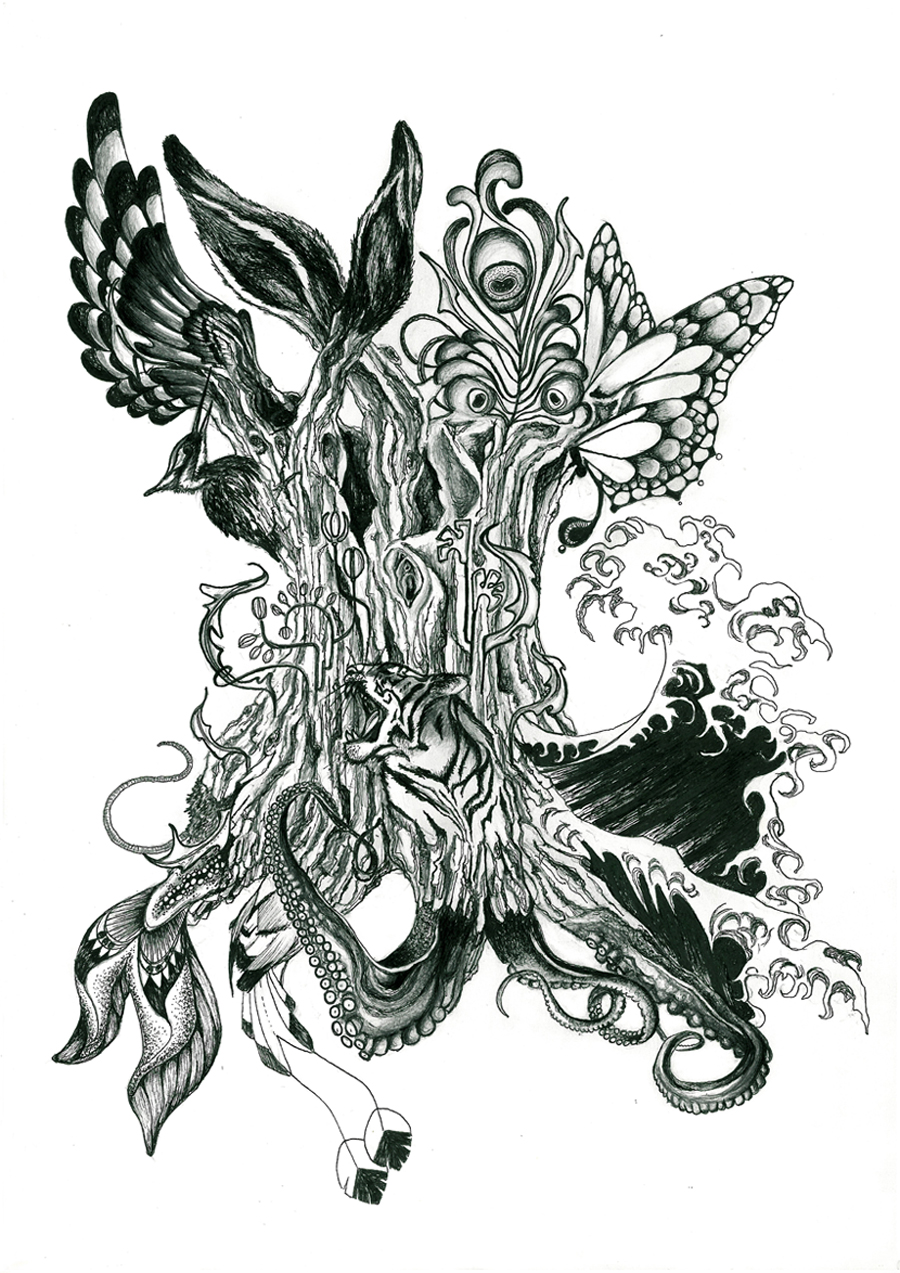 Words-Links:“BLOSSOMING WITH PLEASURE FROM WITHIN

Inbox: Dimitra Ioannou/ “a glimpse of”, issue 11/ Call for participation.
Early spring.
Parallel Universe-Nightmare.
I was dreaming that I was two-dimensional and trees where growing inside my house. Their roots and branches where sprouting to Animal body parts, mainly members of cat and fish… I was trying to cut them down but they were growing back over and over again. The next few days I quickly tried to draw the dream on a paper, feeling the urge to redeem myself.

Days go by. At the next “Closet” I listen to Dimitra read for Laila: “ I am hyper plane and I have defeated all my nightmares. […] I am jagging fish heads. “You must be kidding me…” I say to myself. Later on I share with her my visual draft. Perfect Identification.
A new tree for “a glimpse of” is growing now. Not so horrible anymore as the first one, but fertile and full of personal memories and references to issue 11.
My childhood’s favorite Woody woodpecker. Rabbit ears/Red rabbit roller-skate as well as my first Halloween costume.
Next post: “The day mom realized she gave birth to a rabbit she decided to train me as an Easter Bunny.”
Peacock and owl feathers. A butterfly. The previous desperate catheads now transform into a dynamic and powerful tiger. A rat-tail is there reminiscent of the costumes of Mickey and Mini mouse and my mother’s obsession in masquerading me like a rodent.Prehistoric sea monsters. A tropical bird tail. Some roots transform into waves, Hokusai and Hiroshige Andō waves: A tribute to the years of my collaboration with Christos D. The endless hours of debate, ethos and culture in our mellow routine. A hollow in the center of the tree resembles a woman’s vagina allowing the composition to blossom with pleasure from within.
Fugitive beings, perhaps unlinked, pieces of our collective unconscious. Just like the parts of a dandelion plant shortly before the wind blows them away.

No mind traffic.
Eventually this disturbed blossoming tree might not be so incoherent.
It has legs, arms, ears, eyes…
Three eyes, emphasizing on the middle-third eye / the pituitary / the subconscious.The genitals betray the nature of a woman’s body. A human body in Temporal Τransformation. On the upper part unfold the beauty, eroticism, sensitivities, intuition, naturalness, naivety, grace, and wisdom of females. In contrast, tension, dynamism and autonomy characteristics of male are evident on the base.
I go back in issue 11 and read: Last night I woke up from a beautiful sensual dream: a man who looked like a handsome woman who looked like a man. And just above: Nothing to explain, nothing to interpret.