On Friday 11th October the paper “a glimpse of” was presented at the gallery Andreas Melas & Helena Papadopoulos in Athens, with the Issue’s original artworks, and some new ones inspired by its themes by John Morgan, Anthony Katsouris, and Amalia Vekri. It was alson an opprotunity to see the portraits of the journal photographed by Yoko Danno in Kobe, and hear the recordings of Apostolis Artinos, Sophie Mayer, and Theordoros Chiotis’s works.

“The first red text block is set at 30 degrees from horizontal for 30th Nov when Kathy Acker died. The black is 330 degrees, so 30 from horizontal again, but rolling away, while the final one is 36 and falling away further.”

The night’s soundscape was created by:

• a recording of the poem fri_01 by Sophie Mayer

• a recording of the poem (H)acker by Theodoros Chiotis

Some photos by the poet Yoko Danno were also exhibited. She took “a glimpse of” at the Rokko Shidare (willow tree) observatory on the top of Mt. Rokko (Kobe, Japan), and took some beautiful pictures. She says: “The building is eco-friendly and it says you can experience the changes of the seasons surrounding the Tree.”: 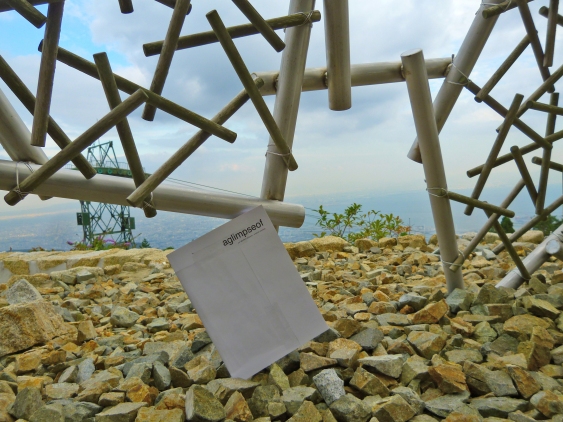 Many thanks to all contributors for entrusting us with their works.