FROM “THE SPHINX WANTS ME TO GUESS” TO “LEPIDOPTERA”

• the sound work Incommensurability by Irini Miga is linked to the words “the Sphinx wants me to guess.”

• the poem Strange Boolean by Sean Smith is linked to the words “guess,” “46.”

· the visual poems The Horror of Butterfly-Angels, the Horror of Rain, my Ruins by Satu Kaikkonen are linked to the words “rain,” “ruins,” “the horror of,” “butterfly-angels.”

· the prose poem Wild Nights by Yoko Danno is linked to the words “roars,” “fog.”

· the photo Helix by Anargyros Drolapas is linked to the words “infinite guesses amongst the maps.”

· the artwork (Cracked) Sphinx by Antonis Katsouris is linked to the words “Sphinx fissuré.”

· the poem Thapierolinsclovecor by Jukka-Pekka Kervinen is linked to the word “lepidoptera.”

“a glimpse of” invited some poets, writers, artists to co-edit Issue’s 14 source-text by contributing a (found or not) text or image inspired by Rae Armantrout’s verses “The Sphinx wants me to guess.” (Up to Speed, Wesleyan University Press). Many thanks to Harold Abramowitz, Theodoros Chiotis, Jeremy Hight, Dennis LHomme, Sean Smith, Matina L. Stamatakis for their collaboration. Please click here so as to identify the authors. Enjoy, guess, and interpret the “riddles”!

THE SPHINX WANTS ME TO GUESS

wants me to guess,

the rain wants me to associate

the flood asks me to count the stones and sunken headlights

the drought calls me to question

the fog asks me to remember

the snow tells me to forget it all

there are infinite guesses amongst the maps , directions and the math of things, gaps too, some to break 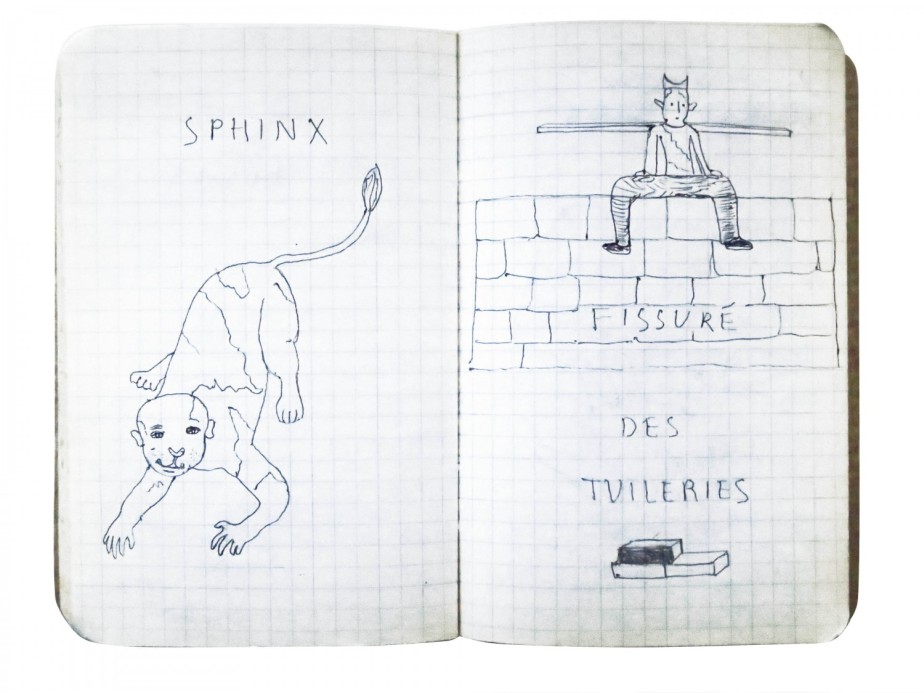 She described a broken collage of black butterfly-angels, flying and hunting, their shadows splaying the white tundra; in the distance an ice palace-pyramid as huge and steep as a mountain, crawled with thousands of these humanoid lepidoptera; and above, in what should have been the sky, a bleak crag of white light poured as if through a hole torn in a cave’s roof. In the last seconds she begged for her life, tossing her head and spilling maggots from the cavity of her eye-socket, then arched sharply as if she had been stabbed below the ribs.

Destroy the Universe
With a solution code

to the hilltop ascending,

what do I expect to see ―

flat surface of a writhing sea?

I wanted to prolong my stay downstairs a little longer so that she might be finished for good in the bathtub upstairs―a horrifying dream. But instead I hurriedly ran up the stairs to pull her out of the water―just in time―while she was still alive. Who was the drowning woman? My indispensable opponent―a flagpole to fasten my tightrope to?

I was struggling for days to write a poem about a woman―without success. The woman appears in the mirror on the wall from time to time when I look at my reflection and sets my nerves afire. I just wanted to ask her how she had managed to escape from her cocker spaniel and the Spaniard, who she said were untiringly stalking her.

She is a big woman, followed by a lot of friends, but whenever I try to observe her closely the spaniel and the Spaniard appear and form a triangle with her. I usually lose sight of her in the ‘magical’ triangle, utterly lost in the fog. Incidentally, a few days ago I read a mystery in which a murderer is ambushed by the assumed victim.

You know what? However hard you try to flee from your giant or your fellow dog, you can’t, because they’re a part of what you are. If you successfully dismiss them, your whole system would eventually fail―that is my fear. There’s no taming one’s nature except practice―practice―practice. The rain in Spain stays mainly in the plain. Whose words?

I feel a current of humid air from the south and hear the calls of birds hurrying home. Cicadas have stopped singing―sign of a storm. Clouds are gathering. The sky will soon be entirely covered without a break―through which I may have a chance to peep into a world beyond, as vast and deep as a madness for flight. Yes, an easy breakthrough is rare.

It is blowing wild, sleet banging on the roof tiles, my old house creaking badly; in occasional flashes of lightning a pair of trees are revealed―the boughs in common, the trunks joined together like Siamese twins, roars of worry howling across the hill, sending shivers up my spine. Visibility becoming poor, how I wish for a clear night!