Instead of republishing a source text in the beginning of this issue, as we usually do, we republished some links to interviews, news, images and articles that reflect the political becoming of our times.

Contributors found their words-links in an Angela Davis interview, the discussion between Bjarke Skærlund Risager and David Harvey on the political nature of neoliberalism, the articles Political Vernaculars: Freedom and Love by Keguro Macharia, Sisters Uncut ‘Reclaim’ Empty Council Home And Transform It Into Community Centre and The art of war: Deleuze, Guattari, Debord and the Israeli defence force by Eyal Weizman which was added to the list by Joey Frances, and the video Refugee crisis: Sea Cemetery which pays tribute to the Syrians who drowned trying to reach Europe. The following image found on Twitter was also a source of inspiration: 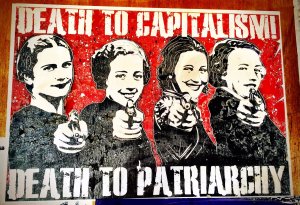